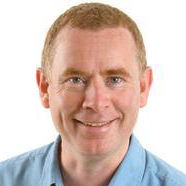 Dr. Kieron Burke is a professor in both the chemistry and physics departments at UC Irvine.  His research focuses on developing a theory of quantum mechanics called density functional theory.

Density functional theory is a way of solving the equations of quantum mechanics for the electrons in any substance. Because DFT equations can be solved relatively quickly on modern computers, DFT has become a very popular tool in many branches of science, especially chemistry and materials science.  Last year, at least 30,000 scientific papers used DFT. For example, hydrogen sulphide was predicted by DFT calculations to have a high superconducting temperature under pressure, and a year later, it was tested and became the world-record holder, at 203K.

Professor Burke works on developing all aspects of DFT: formalism, extensions to new areas, new approximations, and simplifications. His work is heavily used in materials science, chemistry, matter under extreme conditions (such as planetary interiors or fusion reactors), magnetic materials, molecular electronics, and so on. He has given talks in theoretical chemistry, condensed matter physics, applied mathematics, and even organic chemistry. His graduate students and postdocs usually come from either the chemistry or physics departments, but his undergraduate researchers also come from math, computer science, and engineering.  He also runs an internship program for motivated high-school students.

Professor Burke believes that the most impactful advance in 20th century physics was the development of quantum mechanics, without which we cannot understand chemistry and materials. He also believes that there are few problems in theoretical science whose solution has more immediate impact than the improvement of DFT. The more accurate, reliable, and widespread DFT calculations become, the sooner we will have novel materials and drugs, and the more we will understand both our own planet and others.

Kieron Burke is a Chancellor's Professor of UCI, and a fellow of the American Physical Society.  He is known around the world for his many educational and outreach activities.  Most recently, he was honored to participate in the Baker symposium at Cornell in 2016. According to google scholar, his research papers are now cited more than 11,000 times each year.