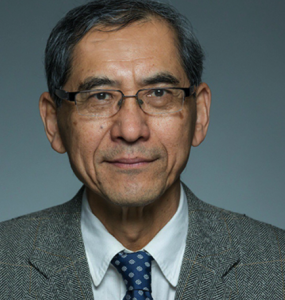 Professor Tajima is a theoretician whose research investigates accelerator physics, plasma physics, fusion, laser physics, astrophysics and medical applications of physics, authoring over 500 papers and 8 books in total. Most prominently, he is the inventor (with Prof. John Dawson) of laser wakefield acceleration (LWFA) and has been involved in a number of theoretical and collaborative experimental projects around the world.

Professor Toshiki Tajima currently holds the Rostoker Chair in the Department of Physics and Astronomy at UC Irvine, which aims to extend Professor Norman Rostoker’s legacy in plasma physics and applied physics. Tajima was Professor Rostoker’s first PhD student at UC Irvine. Between his stints at UC Irvine, he was The Jane and Roland Blumberg Professor in Physics at the University of Texas at Austin, where, among other projects, he started the first DoE-sponsored laser wakefield acceleration project (with Prof. Downer) in 1993. He also part of the team that first demonstrated the experimental Proof-of-Principle of LWFA in 1994,1995. He subsequently served as Director-General of the Kansai Photon Science Institute of the Japan Atomic Energy Agency as well as Chair Professor at Ludwig Maximilian University.

He has been serving as Chair of the International Committee for Ultrahigh Intensity Lasers (ICUIL), Chairman of Extreme Light Infrastructure-Nuclear Physics (ELI-NP) International Science Advisory Board, Deputy Director of the International Center for Zetta- and Exawatt Science and Technology (IZEST) based at École Polytechnique, and a Member of Visiting Committee of CEA of France. Currently, Prof. Tajima also serves as Chief Science Officer of Tri Alpha Energy, a private company that aims to develop and commercialize fusion energy technology.