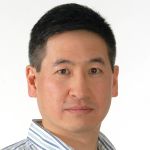 The Simons Foundation appointed Jonathan Feng, Professor of Physics and Astronomy at the UCI School of Physical Sciences, a Simons Investigator in recognition of exceptional and promising research. The appointment is for 5 to 10 years, and includes up to $1,000,000 in research funds to be used at the discretion of the Investigator.
“This award will support our work at UC Irvine on understanding the fundamental building blocks of the universe and its past and future fate, topics that are quintessentially curiosity-driven research,” said Feng. “With no strings attached, this award is the most valuable form of support, and I'm deeply honored to receive it.”
Feng works at the interface of particle physics and cosmology with the goal of elucidating deep connections between our understanding of the Universe at the smallest and largest length scales. His work on dark matter, cosmic rays, supersymmetry, and extra dimensions has been influential in motivating and interpreting a wide range of theoretical and experimental developments, from dark matter searches to the Large Hadron Collider, where the Higgs particle was discovered.
Feng’s research has been featured in many publications, including Science, Nature, the Washington Post, USA Today, National Geographic, New Scientist, Sky and Telescope, and Popular Science.
After earning his B.A. in Physics from Harvard University, he obtained his M.A. in Mathematics from Cambridge University and his Ph.D. in Physics from Stanford University. He joined the UC Irvine faculty in 2001 and became Professor and Chancellor's Fellow in 2006. Among his many accolades include an NSF CAREER Award, UCI's Distinguished Assistant Professor Award for Research, the Outstanding Young Researcher Award from the International Association of Chinese Physicists and Astronomers, a Sloan Research Fellowship, a Simons Fellowship in Theoretical Physics and a Guggenheim Fellowship.
As a Simons Investigator, he will attend the foundation's annual meetings, where he will present his research and interact with other investigators.
Each year a small number of leading physicists, mathematicians, and computer scientists from the United States, United Kingdom, and Canada are selected to receive this prestigious appointment.

Prestigious award will provide five-year appointment with $100,000 of research support per year.