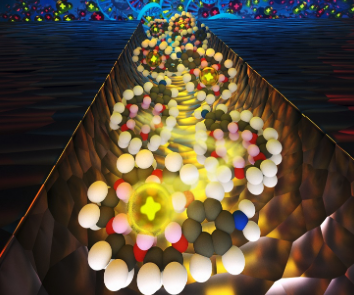 Scientists at UCI and Lawrence Livermore National Laboratory have shown that synthetic nanopores can possess the same ion-transporting and differentiation capabilities as living tissue. They detail their discovery in a study published today in Science Advances. “Biological systems use ion selectivity to chemically store and exchange energy, making it available for use when needed,” said co-author Zuzanna Siwy, UCI professor of physics & astronomy. “Being able to do this with synthetic materials opens the door to making biomimetic systems such as artificial neurons.” In nature, certain biological channels embedded in a cell membrane can respond to external stimuli and tell the difference between two ions of the same charge. Scientists have known that lab-made nanopores can differentiate between positive and negative ions, but in this study, they were able to distinguish sodium from potassium ions despite their equal charge and nearly identical size. The discovery could lead to the creation of artificial cells and channels of greater strength and durability than those found in biological systems. It may also prove useful in applications such as desalination and biosensing.