During its heyday, the galaxy was able to create more than 1,000 solar masses of stars in a year. That's an incredibly high rate of star formation when contrasted with our own galaxy, the Milky Way, and its one new star per year.
"XMM-2599 may be a descendant of a population of high star-forming, dusty galaxies in the very early universe that new infrared telescopes have recently discovered," said Danilo Marchesini, study co-author and an associate professor of astronomy at Tufts University in Massachusetts. 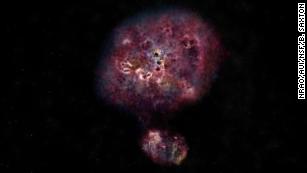 Meet MAMBO-9, one of the most distant
galaxies to ever be observed
But astronomers are unsure of how the giant galaxy evolved. It's unusual when compared to other known galaxies in size. And based on their models, XMM-2599 should still be forming stars.
Original Story: