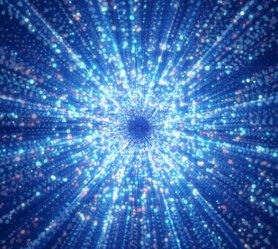 Anomalies in the radioactive decay of beryllium-8 and helium-4 point to the existence of a new force of nature. That is the conclusion of a group of theorists in the US, who have scrutinized data from experiments carried out by nuclear physicists in Hungary over the past five years. Results from the two different isotopes agree on both the mass and interaction strength of the hypothetical boson that would carry the long-sought fifth force, the team found.

The Standard Model of particle physics tells us that matter particles interact with one another via four forces: electromagnetic; strong; weak; and gravity. But theorists have long hypothesized the existence of other forces, including “dark photons” that might mediate interactions between particles of dark and ordinary matter.
It was just such a particle that Attila Krasznahorkay of the Institute of Nuclear Research (ATOMKI) in Hungary and colleagues were hunting when carrying out experiments on beryllium. As they reported in a little-noticed paper in 2015, they fired protons at targets made from lithium-7 to create nuclei of beryllium-8. They then measured the angles between the trajectories of each electron and positron given off in the subsequent decays of the unstable beryllium isotope.
Mystery particle
If the Standard Model correctly describes such decays, the number of emitted electron-positron pairs should gradually drop off as the angle between the two particles increases. But Krasznahorkay and colleagues instead found an increase, or bump, in the distribution at an angle of about 140°. They interpreted this as due to beryllium-8 decaying to a previously unknown particle in a tiny fraction of its decays (before that particle then disintegrates into an electron and positron), calculating the mass of the new particle to be about 17 MeV/c2.
It was only a year later when Jonathan Feng and colleagues at the University of California, Irvine, published a theoretical analysis of Krasznahorkay’s team’s results that others took notice. Feng’s group concluded that the particle in question, if it exists, is not a dark photon but what they called a “protophobic” gauge boson – a force carrying particle that interacts more readily with electrons and neutrons than it does protons.
For other theorists, such unusual interactions cast doubt on the claimed discovery. More importantly, no other experimental group has since reproduced the anomalous results. In fact, the NA64 experiment at the CERN laboratory in Switzerland has narrowed down the range of such a particle’s possible interaction strengths by looking for evidence of its coupling to electrons and finding nothing.
Similar bump
Undeterred, Krasznahorkay and colleagues have pressed on. They rebuilt their detector between 2017 and 2018, and found that the bump at 140° remains. More strikingly, they found a similar bump at 115° in the decay of helium-4. Remarkably, they calculated that the particle responsible for this anomaly would also have a mass of about 17 MeV/c2.
That result was reported in autumn 2019 via a preprint on arXiv and prompted sensationalist headlines declaring that a Nobel prize might be in the offing. However, Feng realized that more could be done to establish whether the latest data really do stack up consistently against the old. In a new preprint, also on arXiv, he and a couple of theorist colleagues at Irvine, Chris Verhaaren and Tim Tait, not only check whether the two results agree on the mass of a putative new boson but also calculate what the particle’s interaction strength would be in each case.
Feng, Tait and Verhaaren point out that beryllium-8 and helium-4 decay at similar rates within the two experiments. But they say that that does not necessarily imply similar interaction strengths between the new boson and the quarks in each nucleus, noting that the excited states in each case have different quantum numbers and different excitation energies. They add that the beryllium-8 measurement was done on resonance while that of helium-4 was carried out between two resonances.
Remarkable agreement
After factoring all these things in, the trio concluded that the new particle does indeed interact with the same strength in both cases. Specifically, they find that the helium-4 decay rate calculated using the properties of the protophobic boson from their analysis of the beryllium-8 data agrees with the rate from the helium data. What is more, they say that such close agreement is not possible with any other type of hypothetical force carrier. “For other new particles proposed to explain the beryllium data, the predicted helium rate can be orders of magnitude off,” says Feng. “So, this concordance is, frankly, remarkable.”
To settle the issue once and for all, Feng and colleagues say that other experimentalists must try to reproduce the results. But they also propose several new measurements that could provide additional confirmation. Requiring only simple modifications of the existing experimental set-up, these include gathering data to better understand background processes as well as measuring decays from carbon-12 – whose rate they predict precisely. “If the predictions are confirrmed, these measurements will provide overwhelming evidence that a fifth force has been discovered,” they write.
MICROSCOPE focuses tighter limits on a fifth force
Other theorists welcome the new analysis. Rouven Essig of Stony Brook University agrees it is important to establish consistency of interaction strength, while Jesse Thaler of the Massachusetts Institute of Technology also encourages other experimentalists to enter the fray. Indeed, he believes it is vital. “Only a confirmation from an independent experiment would give me significant confidence in the ATOMKI result,” he says.
One collaboration planning to test the anomalous result is DarkLight, based in the US. This will look for evidence of the 17 MeV/c2 boson by firing electrons from the Jefferson Lab’s CEBAF injector at a tantalum target. According to co-spokesperson Richard Milner of MIT, the experiment should produce results within the next couple of years – assuming that scientific approval and funding are forthcoming.
Link: