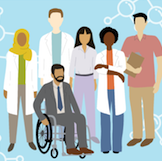 All are welcome at the UCI School of Physical Sciences.
The plan calls for the entire department to consider how racism manifests itself in academia, and to then follow those considerations with action.
After the murder of George Floyd by police in June, and after the many messages from various parties voicing support for the Black community and condemning anti-Black racism, the UCI Department of Physics & Astronomy gathered together and drafted a community action plan that puts them on the path to transform their department into a place that actively fosters inclusion and equity. The hope is that, with enough conscious reform, the institutional racism that plagues all places of higher education will become, more and more, something of the past.
“In early June, we quickly had a town hall and, basically, we wanted to make some kind of action plan,” said Franklin Dollar, a plasma physicist in Physics & Astronomy and that department’s Vice Chair for Diversity, Equity and Inclusion. “In the past, we would make statements of our commitment to inclusive excellence, but there wouldn’t necessarily be any change in how we operate. This time we’ll be supporting that statement with numerous actions that are going to take place in the coming year.”
There are, Dollar explained, three “thrusts” to the department’s plan: address systemic and institutionalized racism, engage in stronger support for their Black community, and increase Black representation in Physics & Astronomy research. Actions include connecting with physics departments around the world so they can swap notes on how to foster a more inclusive workplace, an effort that’s already led the department to drop its requirement for prospective graduate students to take the graduate record exam (GRE) general and subject exam.
The department also plans to provide training for its students, staff and faculty on cultural sensitivity, and how racism is at work in our institution in ways that can be hard to identify, and it will form collaborations with researchers at the nation’s historically black colleges and universities (HBCUs). “There’re over 100 HBCUs out there, and we should be collaborating with them,” said Dollar. “If we don’t invite diverse people to participate, and if we don’t show up at minority-serving institutions looking to collaborate, then nothing will ever happen.”
Maybe the chief hurdle facing his community, Dollar added, is going to be garnering broader support. “The sad reality is that most people don’t do anything if it doesn’t affect them,” he said. To that end, there’ll be annual town halls where the department will assess the progress it’s made on its plan, as well as an annual report on progress in inclusive excellence.
“I’m very excited to see us moving beyond meetings about diversity and inclusion, and to begin to take more active steps in constructing a plan to combat the impact of anti-Black racism our institution,” said Timothy Tait, professor Physics & Astronomy chair who earlier this year was part of a call to shut down his research community in support of Black lives. The effort takes places amidst the backdrop of a broader UCI effort, the UCI Black Thriving Initiative, to curb the rot of institutional racism.
“The hope is that this is the start of something,” Dollar said. “If we can figure out how to support our Black community, we can figure it out for other underrepresented populations.”
Picture Credit: Tiffany Kuo
Original Story: