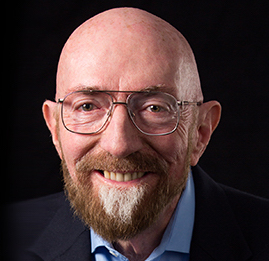 Date:
Tue, 03/06/2018
Time:
7:30 pm
Location:
Irvine Barclay Theatre
Event Details:
There are two types of waves that can propagate across the universe: electromagnetic waves and gravitational waves. Galileo initiated electromagnetic astronomy 400 years ago by pointing a telescope at the sky and discovering the moons of Jupiter. LIGO recently initiated gravitational astronomy by observing gravitational waves from colliding black holes. Thorne will describe this discovery, the 50 year effort that led to it, and the rich explorations that lie ahead. Kip Thorne was a co-winner of the 2017 Nobel Prize in Physics for the detection of gravitational waves. The discovery, part of the LIGO experiment, validated Albert Einstein’s longstanding prediction that during cataclysmic events the fabric of spacetime can be stretched, sending gravitational tremors across the universe. Thorne is a graduate of Caltech and Princeton University. His research has focused on Einstein’s general theory of relativity and on astrophysics, and he co-founded the LIGO Project. Among his many distinctions, Thorne has been awarded the Albert Einstein Medal, the UNESCO Niels Bohr Gold Medal, the Common Wealth Award for Science, and was named California Scientist of the Year. He has been elected to the American Academy of Arts and Sciences, the National Academy of Sciences, and the Russian Academy of Sciences. In addition to his renowned scientific research in theoretical physics, he is involved in writing and movie production. Most notably, he worked on Christopher Nolan’s film Interstellar. The Reines Lecture Series honors Frederick Reines, UCI’s Founding Dean of Physical Sciences and co-recipient of the 1995 Nobel Prize for discovering the neutrino.