Astronomers peer into a black hole’s ‘sphere of influence’ 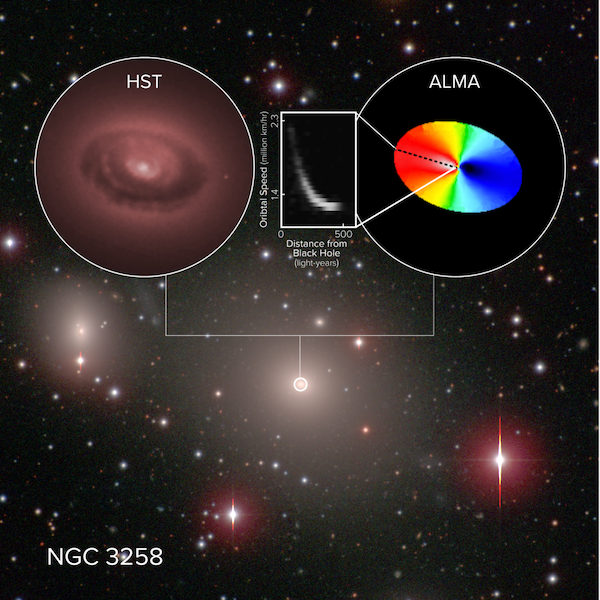 A team of astronomers from UC Irvine, Texas A&M, and other institutions used the Atacama Large Millimeter/submillimeter Array (ALMA) to map the rotation of a cold molecular gas disk within the inner 500 light-years around the center of the giant elliptical galaxy NGC 3258. The ALMA data provided the clearest map ever obtained of the rotation of a cold gas disk around a supermassive black hole, and a high-precision measurement of the black hole. At 2.25 billion Solar masses, it's the largest black hole discovered with ALMA observations to date.

Lead author Benjamin Boizelle initiated the ALMA data analysis as part of his Ph.D. thesis work at UC Irvine in Aaron Barth's research group, and he completed the project as a postdoctoral research associate at Texas A&M. Other coauthors on the work include UCI astronomer David Buote and Texas A&M astronomer Jonelle Walsh, who earned her Ph.D. at UCI in 2011.

The paper describing the NGC 3258 results was published the Astrophysical Journal on August 7.

See the press release about NGC 3258 on the web site of the National Radio Astronomy Observatory (NRAO) and a news brief at UCI News.