– Professor Liu Chen is selected as Laureate of 2019 –
The Division of Plasma Physics  under the Association of Asia Pacific Physical Societies selected Professor Liu Chen of the University of California at Irvine as the 2019 Laureate of the S. Chandrasekhar Prize of Plasma Physics, which is awarded to scientists who have made seminal / pioneering contributions in the field of plasma physics. The S. Chandrasekhar Prize is an internationally authoritative annual prize awarded to an outstanding scientist (s) in the field of plasma physics as a basis for astrophysics or fusion research, and plasma applications.
Professor Chen is awarded in recognition of his pioneering and seminal theoretical contributions to physics of both magnetic fusion and space plasmas; including, notably, geomagnetic pulsation theory, nonlinear gyrokinetic theory, Alfvén wave heating and kinetic Alfvén waves, toroidal Alfvén eigenmodes, “fishbone” and energetic particle modes, and excitation of zonal flow in toroidal plasmas.
Professor Chen is now the only recipient for all three top awards in plasma physics: The 2012 Maxwell Prize by The American Physical Society [APS], the 2008 Alfvén Prize by The European Physical Society [EPS], and now the Chandrasekhar Prize by AAPPS. 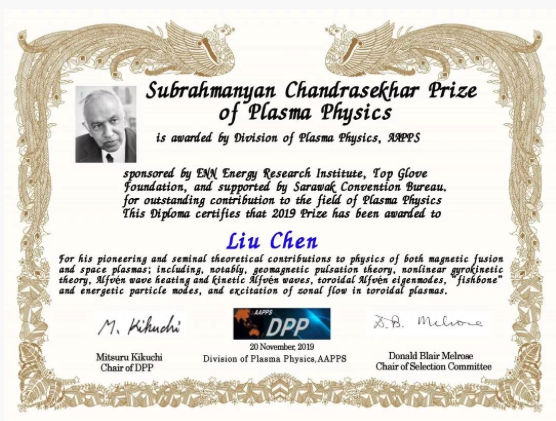