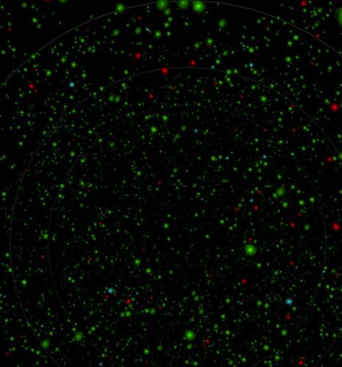 Irvine, Calif., May 18, 2021 — The Dark Energy Spectroscopic Instrument collaboration launched a new era in cosmology today with a five-year endeavor to construct the largest three-dimensional map of the universe.

Comprised of nearly 500 scientists from around the globe, including astronomers at the University of California, Irvine, the DESI group will collect spectral data from more than 30 million galaxies to study dark energy, an as-yet-unknown substance believed to be causing the expansion of the universe to accelerate.

DESI’s unprecedented ability to rapidly map galaxies will help astronomers fine-tune models of how the universe evolved, test deviations from Einstein’s theory of general relativity, and move closer to lifting the veil on the elusive dark energy.

With permission from the Tohono O’odham Nation, the DESI team is surveying the distant cosmos from the Kitt Peak Observatory atop Iolkam Du’ag mountain near Tucson, Arizona.

“This is the most ambitious project of its kind, as data taken from the testing and validation phase alone already surpasses the number of spectra, or light that has been splintered into its constituent colors, taken by all other telescopes combined,” said DESI data system scientist David Kirkby, UCI professor of physics & astronomy. “The survey will fill a crucial gap by measuring the expansion rate over the past 11 billion years, complementing measurements from the early and late universe using data from the cosmic microwave background and supernovae.”

To achieve their goals, the DESI collaboration is targeting multiple types of galaxies, each with unique properties that make it ideal for studying different epochs in the universe’s history.

“A key cosmological probe for DESI examines quasars, some of the most distant and brightest objects in the universe,” said Bela Abolfathi, a graduate student at UCI who has been working on the DESI survey for five years. “Similar to how hills and dips can trace the landscape when you take your car off-roading, the absorption and emission lines in each quasar spectrum are signatures of the intervening matter between the quasar and our telescope, giving us a map of the cosmological landscape.”

Unlike traditional imaging surveys, which take pictures of large swaths of the night sky, the DESI method involves pointing hair-thin optical fibers at individual sources for longer periods of time. According to Kirkby, the instrument is able to target an unprecedented number of galaxies despite the time-intensive process of obtaining spectra, thanks to an ingenious twist on the design of its predecessor, the Extended Baryon Oscillation Survey. Instead of manually plugging metal plates with 1,000 optical fibers, DESI’s focal plane contains 5,000 robotically controlled fibers that feed light into 10 different spectrographs, allowing five times as many galaxies to be studied every 20 minutes.

“The results are extremely promising, as seen in an animated visualization developed at UCI which shows all the galaxies captured by DESI in a window only four degrees wide,” said Kirkby. “If you were to extend your arm out directly in front of you, these galaxies would be packed into a space that fits behind your palm. Each spectrum results in a unique galactic fingerprint which adds the third dimension to our 2D images.”

Because the light from the most distant objects has traveled over 10 billion years, “each spectrum lets us peer into the distant past, enabling astronomers to transform a two-dimensional image of the sky into a complex map of the galaxies, clusters and superclusters that populate the universe,” Kirkby said.

The DESI survey culminates nearly a decade of preparations by a large international team dedicated to planning, designing and building different components of the instrument and software. Kirkby leads a team at UCI that was responsible for developing the Exposure Time Calculator, a tool to ensure that every photograph is perfectly exposed. Graduate students Abby Bault and Dylan Green conducted observations for targeting surveys, developed mock-ups for target selection and validated the instrument during commissioning of the telescope.

DESI is supported by the U.S. Department of Energy Office of Science.