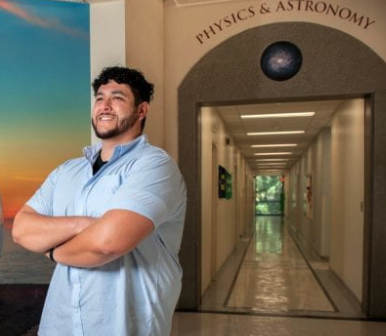 She morphed from an Army saxophone player (who also portrayed Winnie the Pooh at Disneyland) into a card-carrying astrophysicist, courtesy of “Star Trek: Voyager,” UCI and a then-little-known program called Cal-Bridge.
As one of Cal-Bridge’s first five scholars, Katy Rodriguez Wimberly is a poster child for the initiative, which finds “diamonds in the rough” at California State University and community college campuses and steers them toward UC doctoral programs, mostly in astronomy and physics.
Launched in 2014, Cal-Bridge aims to boost the ranks of women and underrepresented ethnic groups among science professors and practitioners. Each scholar receives two years of financial aid and extensive mentoring from UC and CSU faculty while completing their undergraduate degree. At UCI, the program is led by Kevork Abazajian, a professor of physics and astronomy who also directs Cal-Bridge’s physics and astronomy operation statewide.

“It helped so much it’s hard to put into words,” says Rodriguez Wimberly, who dropped her entertainment career aspirations after “watching a lot of ‘Star Trek: Voyager’” and realizing her true passion is in the heavens, not Hollywood.

In her late 20s, while working as a staff sergeant and saxophonist in the U.S. Army Reserves, she returned to college, this time focusing on physics and astronomy instead of theater. And Cal-Bridge proved critical. Studying physics is very different from studying acting, she says, but the program’s advisors showed her the ropes and offered guidance on seeking a doctoral degree.
Francisco Javier Mercado, who expects to finish his Ph.D. in astronomy at UCI next summer, says he was “barely hanging on” during his first two years at Cal Poly Pomona, juggling school and a full-time job. Cal-Bridge’s financial aid package freed him up to concentrate on academics and conduct research as a junior and senior.
Mercado and Rodriguez Wimberly, a mother of two who earned a Ph.D. at UCI last year and now explores galaxy evolution as a postdoc at UC Riverside, both say they hope to land faculty posts. That’s exactly the kind of outcome that was envisioned by Cal-Bridge founder and executive director Alexander Rudolph, a professor of physics and astronomy at Cal Poly Pomona.
Students from minority groups are “so badly underrepresented in physics it’s shameful,” he said when the program got underway eight years ago. At the time, Hispanics, Blacks and Native Americans made up 27 percent of the U.S. population but less than 4 percent of those earning doctorate degrees in physics and astronomy.
UCI faculty played key roles in forming Cal-Bridge, which was modeled after a similar grad school pipeline connecting Fisk University, a historically Black college in Nashville, Tennessee, to Ph.D. studies at nearby Vanderbilt University.
When Rudolph devised his spin on the concept and needed UC partners, he turned to UCI astrophysicist Tammy Smecker-Hane, now retired. She began recruiting professors at UC campuses while Rudolph worked the Cal State crowd. And Abazajian designed workshops and professional development programs for the student scholars.
Seeded with a $600,000 National Science Foundation grant, Cal-Bridge debuted as a consortium of eight Cal State schools, five UCs and eight community colleges in Southern California.
In 2017, a $5 million NSF grant enabled the project to expand to Northern California and add majors. Today, Cal-Bridge counts 180 faculty mentors working with 90 student scholars studying astronomy, physics, computer science and math. Nine UC campuses, 23 CSU schools and more than 110 community colleges belong to the statewide network.
Abazajian is Cal-Bridge’s longest-serving UC member. And UCI, he says, is No. 1 among UC schools in admitting Cal-Bridge physics and astronomy scholars.
“It’s a terrific success story,” Abazajian says. “Ninety percent of our scholars get into graduate programs, and nearly 40 percent are women and 59 percent are underrepresented minorities, predominantly Latinos and Latinas. Slowly but surely, Cal-Bridge is helping to create a STEM workforce and professoriate that better reflect the population of this state.”
Original Story: