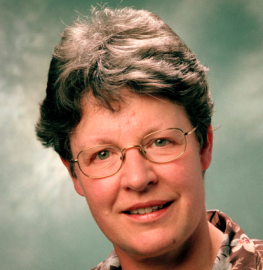 Dame Jocelyn Bell Burnell, visiting professor at the University of Oxford and chancellor of Scotland’s University of Dundee, enthralled a capacity audience in the Irvine Barclay Theatre on the UCI campus Tuesday night as she delivered the 2019 Reines Lecture. Bell Burnell, named dame commander of the Order of the British Empire in 2007, recounted her time as a graduate student at the University of Cambridge in the 1960s and as an early pioneer in radio astronomy. After helping build a telescope array in a field near the university, she endured many cold and damp nights analyzing radio signals from space as they were received by the observatory and printed on sheets of paper stretching for miles by the end of the research project. In the radio frequency squiggles etched on the scrolls, she began to see patterns, a signal from a rapidly rotating neutron star pulsing regularly every 1.3 seconds. The astrophysicist’s painstaking efforts resulted in the documented discovery of pulsars. The scientific feat earned the 1974 Nobel Prize in physics, but the named recipients were Bell Burnell’s advisers and not her. However, her list of awards is nonetheless stellar, including the 1973 Albert A. Michelson Medal, the 1986 Beatrice M. Tinsley Prize, the Royal Medal of the Royal Society of London in 2015, and the 2018 Special Breakthrough Prize in Fundamental Physics – which came with $3 million that she used to encourage more women, underserved students and immigrants to pursue physics studies. Bell Burnell is a fellow of the Royal Society of London, a fellow of the U.K.’s Royal Astronomical Society, former (and first female) president of the U.K.’s Institute of Physics, former (and first female) president of the Royal Society of Edinburgh and former president of the U.K.’s Royal Astronomical Society – as well as a foreign member of seven academies. The Reines Lecture Series honors Frederick Reines, UCI’s founding dean of physical sciences and co-recipient of the 1995 Nobel Prize in physics for discovering the neutrino.
CLICK HERE TO WATCH THE LECTURE